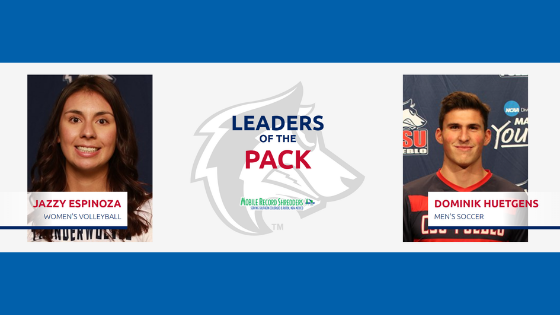 Mobile Record Shredders is a proud supporter of Athletes of the Week for CSU-P. This week they are Jazzy Espinoza (Women's Volleyball) and Dominik Huetgens (Men's Soccer).

Jazzy Espinoza (Jr., Cheyenne, Wyo.) averaged 5.0 blocks per match and 1.7 blocks per set in a 2-0 home weekend for the ThunderWolves where the team swept UCCS and Black Hills State. She totaled nine block assists and had one solo block in the two matches. Espinoza added one dig from the front row. She also totaled 15 kills and hit .538.

The junior added four service aces and totaled 24.5 points on the weekend. Against the Mountain Lions she had four block assists and a solo block, then versus the Yellow Jackets she produced five block assists.

Dominik Huetgens (Jr., Halstenbek, Germany) helped lead the ThunderWolves in a 1-0-1 weekend. Huetgens led the defense in holding Colorado Christian to three shots and none landing on frame.

Sunday, Huetgens added an assist on a goal in the fourth minute of play at Fort Lewis. Huetgens and Co. gave up a goal late in the second half and held the Skyhawks scoreless thru two overtime periods.