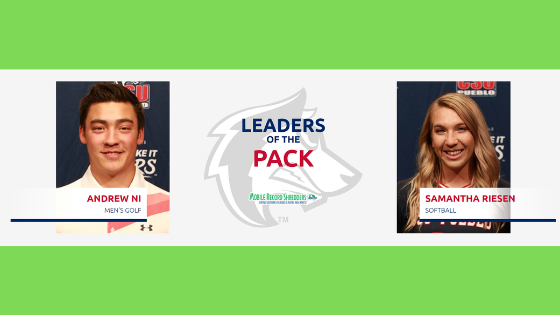 Mobile Record Shredders is a proud supporter of Athletes of the Week for CSU-P. This week they are Andrew Ni (Men's Golf) and Samantha Riesen (Softball).

Andrew Ni (Jr., Edinburgh, Scotland, UK) was crowned the 2021 RMAC Individual Champion after finishing the RMAC Championships three-under. Ni led a group of three Pack players in the top five. He shot an even-par 72 Tuesday to finish 70-71-72—213 (-3) and win by five strokes. He started and finished his round with a birdie. Ni led the field in Par 4 scoring at two-under. He carded the most pars with 41.

Samantha Riesen (Sr., Independence, Calif.) helped lead CSU Pueblo softball to a four game RMAC series sweep on the road at New Mexico Highlands. Riesen recorded a .500 batting average (6-for-12) five of the hits were for extra bases. She hit three doubles and two home runs and totaled 11 RBI, five runs, 15 total bases and was hit by pitch three times. She finished with a 1.250 slugging percentage.

Doing double duties in the circle, Riesen picked up two wins over 9.1 innings pitched and allowed three runs on six hits and three strikeouts. She held NMHU to a .188 batting average.