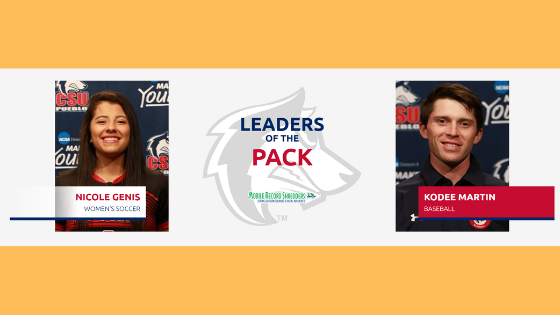 Mobile Record Shredders is a proud supporter of Athletes of the Week for CSU-P. This week they are Nicole Genis (Women's Soccer) and Kodee Martin (Baseball).

Nicole Genis (So., San Jose, Costa Rica) was named Rocky Mountain Athletic Conference Goalkeeper of the Year in her first season with the Pack. She earned RMAC Tournament MVP after she helped guide the Pack to the first RMAC Championship in program history after she made 25 saves in three RMAC Tournament games including two big saves during a shootout in both the semifinal and final rounds.

Genis made her postseason debut last Tuesday at Regis and made seven saves in a 2-0 Pack shutout win.

In the semifinals against No. 25 Colorado School of Mines, Genis again stood tall and held the Orediggers scoreless and made 12 saves against the potent Mines lineup. The ThunderWolves battled Mines to a scoreless affair through two overtimes and taking the game into a shootout.

Kodee Martin (Sr., Platte City, Mo.) went 8-for-13 at the plate and recorded two doubles, a triple, five runs and 3 RBI for the ThunderWolves against Colorado Christian.

Martin went 3-for-6 in the series opener with two XBH.