Sponsored Athletes of the Week 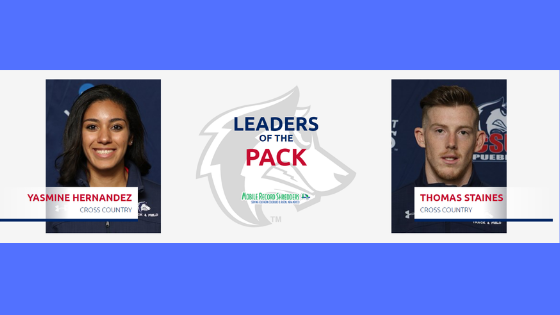 Mobile Record Shredders is a proud supporter of Athletes of the Week for CSU-P. This week they are Yasmine Hernandez (Cross Country) and Thomas Staines (Cross Country).

Yasmine Hernandez (So., Johnstown, Colo.) scored four points when she raced to fifth in the 800m with a time of 2:10.50. She gathered First Team All-American recognition for the second time in her career, as she was a member of the women's distance medley relay team that placed fourth at the indoor championships.

Hernandez and the women's squad tied for 39th with five points, which is the program's best outdoor national championship finish in the NCAA Division II era. The 2011 team finished 46th with four points. According to available records, these championships mark the first time in program history the ThunderWolves have had two outdoor First Team All-Americans.

Read the rest of her story here.

Staines won his second NCAA DII Outdoor Championship in the 800m, which was his fourth straight title in the event (twice an indoor champion). He has five national championships to his name after anchoring the distance medley relay team to the top of the podium at this year's indoor championships. He is the 11th athlete at the Division II level to win back-to-back 800m outdoor championships.

Staines posted a time of 1:50.03 to gather First Team All-American honors and 10 team points for the Pack. The ThunderWolves finished with 22 points to finish in a tie for 10th.

Read the rest of his story here.

To learn more about how Mobile Record Shredders can protect your documents, please contact us to get a free quote.