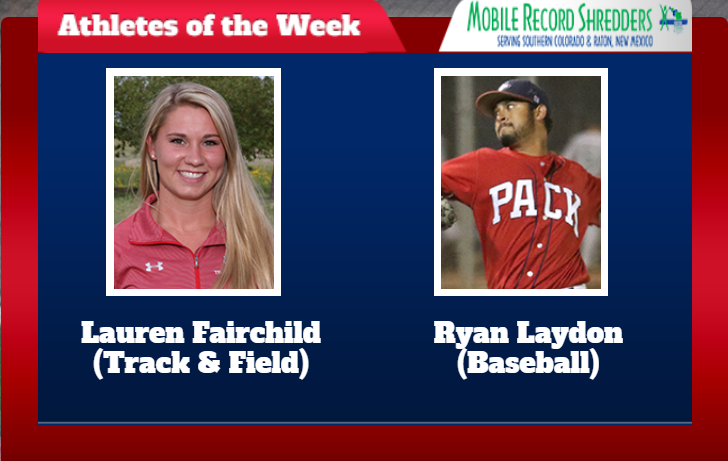 Mobile Record Shredders is a proud supporter of Athletes of the Week for CSU-P. This week they are Lauren Fairchild (Track & Field) and Ryan Laydon (Baseball).

Sophomore Fairchild posted her season-best leap in the long jump with a mark of 5.78m, which was just .01 meters off a provisional mark. Read the full article here.

Ryan Laydon (Pueblo, Colo.) celebrated his senior weekend with two saves. Laydon led the Pack to a 3-1 series win over Adams State University that gave them the No. 4 seed in the Rocky Mountain Athletic Conference Tournament.

The Pueblo native made two relief appearances for the ThunderWolves. In 5.2 innings pitched, Laydon surrendered just one run. He allowed only three hits and two walks. The lefty fanned three batters.

In the 14th annual Pack the Park game, the Pack held a one-run lead in the sixth inning of a seven-inning game. With the go-ahead run coming to the plate, the Pack turned to Laydon who came in and got two outs. Laydon would also throw a scoreless ninth to clinch a 4-3 win. Read the full article here.

Mobile Record Shredders is a proud supporter of Athletes of the Week for CSU-P. This week they are Nikol Podlacha (Track and Feild) and Preston DeHerrera (Lacrosse).

"Nikol Podlacha recorded her first collegiate victory when she won the discus throw at the CSU-Pueblo Open Sunday with a mark of 43.46m.

The personal best ranks 39th in Division II this season and beat out 13 other competitors in the event. Saturday, the sophomore finished third in the hammer throw with a distance of 48.33m." Read the full article.

Preston DeHerrera (Lacrosse) helped the Pack to a 1-1 week and a colossal upset of Westminster. He totaled seven ground balls and two caused turnovers.

The LSM corralled three ground balls and forced a turnover as he helped the Pack beat the Griffins 14-12. The Pack's upset win over WC helped them set a new program wins record at 4-4. Read the full article.

Call us today at (719) 544-5460 or fill out the form on the right for more information on services available near you, and we will get you several quoted options for free.