It appears that the documents found in the dumpster are linked to a Hillsboro Law Group. Most of the documents were tax returns with social security information on them. 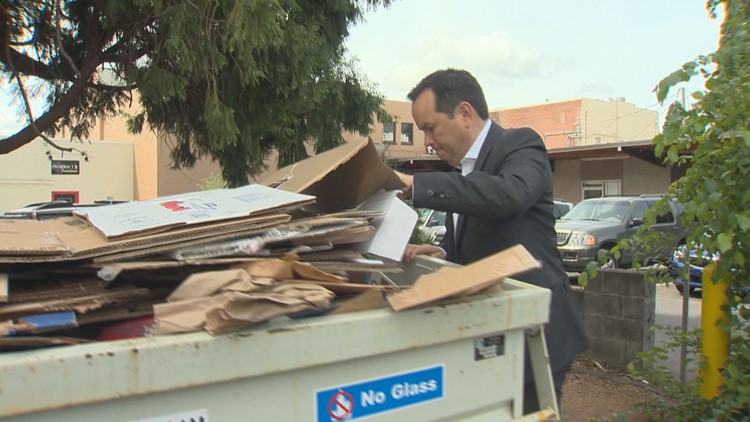 Hundreds of records of confidential legal documents were found in a recycling dumpster in Hillsboro. The documents contained information of emails, delicate customer records, and tax returns with social security numbers on them.

A lady who worked at a nearby business who shared a recycling dumpster with the company found the confidential information. “I was appalled that this information was just sitting there,” said Melissa.

“I took out my recycling and all these law papers were just sitting on top of the boxes,” said Melissa. “This could be a gold mine in the wrong hands.”

According to Melissa most of the documents seemed to be connected with a law group that has an office close by. She said she emailed and called St. Andrew Legal Clinic in Hillsboro but never got a response.

Just days after Melissa found the documents in the dumpster and after she had notified the law office, it was discovered that most of the documents had been removed. However, there were still legal records and receipts still in the open dumpster.

One form titled “Intake Sheet” included the contact information, name of the customer, the person’s recent wage information, estimated retainer and attorney’s fees, along with why the person needed legal assistance.

“It’s upsetting to know that all of my personal information is not being disposed of properly,” said Brendan.

We know the harms of identity theft and the harm it can cause to your life if your social security number is exposed. But according to the Identity Theft Resource Center, a new bill was introduced to the senate to reduce the threat.

“The Identity Theft and Tax Fraud Prevention Act of 2015, introduced this past March by Sen. Bill Nelson, D-FL, includes some dramatic steps that are designed to minimize the threat to consumers. One of the very first items that can help protect individuals from losing their information in data breaches (either intentional or accidental) is to limit the uses of the Social Security number, specifically in the healthcare system.

Use of the SSN as a convenient means of identifying people in large systems of records has increased over the years and its expanded use appears to be an enduring trend… Generally, there are no restrictions in federal law precluding the use of the SSN by the private sector, so businesses may ask individuals for an SSN whenever they wish (Streckewald 2006),” explained Puckett in a document for the Social Security Administration.

While it’s not illegal for an agency or a place of business to request your Social Security number, it’s also not required that you provide it. You don’t have any legal recourse, though, if a business like a doctor’s office refuses to treat you if you don’t provide it. What is more unfortunate about the use of SSNs as an identifier is the fact that many places will request it as standard procedure without even really knowing why they’re asking for it. It’s as if we’re so accustomed to handing it over on a form or during a registration process that we do it without even thinking about it.

The bill, which has garnered a lot of support from lawmakers, would eventually halt the practice of using your Social Security number in healthcare settings. This would be good news for consumers in that a number of hacking events and internal data breaches have occurred through healthcare and insurance offices, like the recent Anthem Healthcare breach. The bill would also increase the penalties for certain identity theft practices, like tax refund fraud or distributing stolen personal data. Finally, the bill does a lot to upgrade the current IRS practices of reporting and correcting tax refund fraud.”

Read the full article, and contact us for more information about steps you can take to stay out of harms way.